In 1995, Games workshop released a table top game of gang warfare called Necromunda, a more basic and easy to play version of Confrontation, an underhive gang warfare game they’d run as a series of articles in White Dwarf. My pal RJ and I used to play that, with him playing scavvies, and me with a brat gang. Many of the old Confrontation miniatures would be revitalised when Necromunda was released, and I can still remember one of the Tech gang brandishing a bolter – plastic arms and weapons meant you could give them pretty much anything with relative ease. The new Necromunda was a new kettle of fish though. As the rules to 40k changed from RT/Second ed, and I found myself struggling to get my head round them (look, lascannons can fire 0-72″, have S-9 and do 2D6 damage, okay?), so Necromunda was a breath of fresh air, and it was probably the last big game I played prior to people heading off to uni, and people from the hellhole that was school disbanded and went their separate ways. 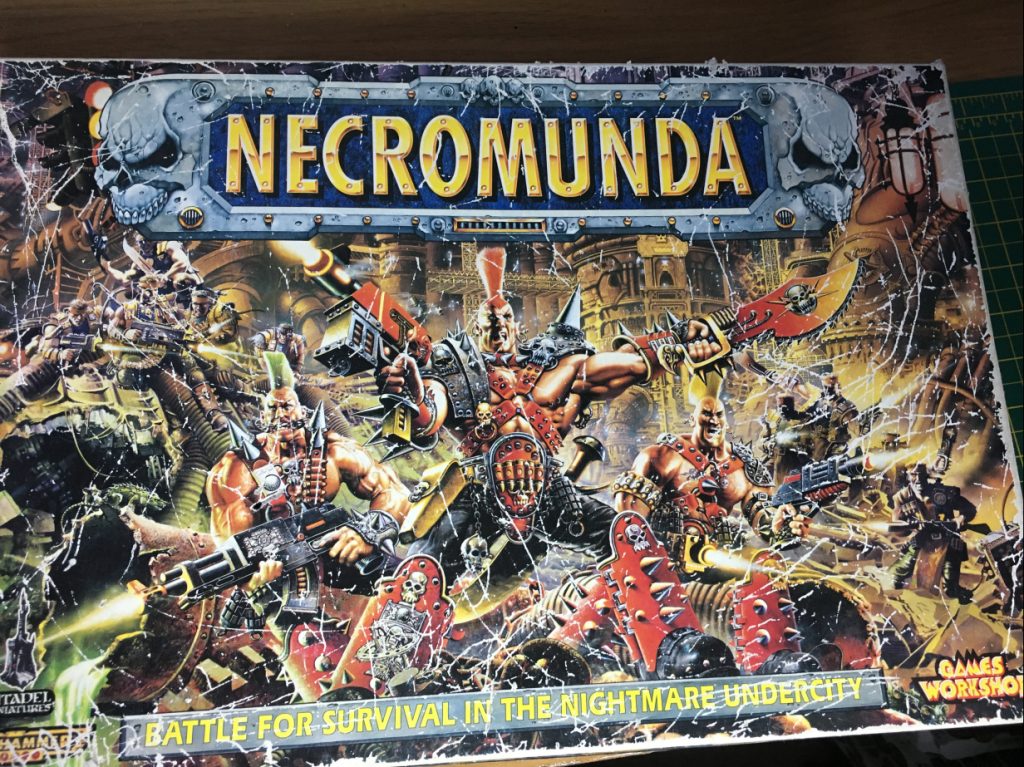 It contained two gangs, Orlocks and Goliaths, and some great scenery, and was so playable, we ran a campaign over months and months between my brother (Delaque and Orlock), our pal Nath (Cawdor and) and myself (Orlock – My original gang (Misfits) shown below – and Scavvies). We split up a sheet of A3 paper into equal sized sections, rolled randomly for what they were, set up start points, and set about trying to conquer the map. It was phenominal, and between that and the Blood Bowl season played years earlier, it’s hard to say which was the best gaming campaign. I think Necromunda had it though.

The original came with scenery, but also had an element of build your own scenery too.

In a time when there wasn’t too much scenery about, old Flora (margarine) and coleslaw tubs. Card tubes with metal end caps from whiskey, anything was fair game. I had a piece of old plastic drainpipe which was like a HUGE tube coming out the side of the wall, with different levels to stand people on. Small squares of scatter terrain were built up with old electronic parts from a stereo. The mesh from the speakers was turned into wire mesh fences (with dodgy sharp edges… – you can see them in the picture above, top right of the box). The game was amazing, and absorbed our lives. Nath ventured into Spyrers, my brother’s Men in Black gang grew to epic proportions so it was like fighting a small army, and still the game went on. For me, they were truly great days for gaming, imagination was everything.

And yesterday, 22 years after the original, Necromunda hit the shelves again, this time with nicer plastics, less scenery – not a complaint, I talk about that shortly – and updated rules.

The box itself is as sturdy and well-presented as every new GW box is, by that I mean it’s lovely. Great artwork, nice features of the components, and enough info on the back to wet your appetite. Even the inside of the box looks good! Inside the box, magic starts to happen…

I’m sure you know the plastics nowadays are really nice, and Necromunda is no different. It’s amazing to see the gangs in such nice, crisp detail. Tonnes of parts, and being in plastic, it means that it’s so much easier to convert the miniatures if you want to. You also get a number of bulkheads and smaller scenery items to use on the boards.

Beneath the sprues you have a big sheet of instructions, showing how you can assemble them, and then beneath that you have the rules, boards, tokens, dice, detailed bases (bonus!) and cards.

Now there’s been a fair bit of griping online about the fact that the initial box is set in the sewers for the fighting, and there isn’t loads of 3D terrain like there was for Shadow War Armageddon, and that the rules for it are in a separate book. Everyone is entitled to their opinion, and mine is this – it doesn’t really matter, it’s just a great game. Most people will have some terrain they can use, and if they don’t, they can build it. One of the best things about 40k when I first got into it, was that there were rules for creating vehicles, and you could make and use any old thing for scenery (or indeed vehicles. The loosely boat-shaped plastic bit out of a Christmas Chocolate bar selection was turned into a boat that could hold about 20 marines – no I don’t have pictures, yes I am glad I don’t), and I think that the lack of scenery gives you the opportunity to get creative, loot the bits box, and start building some scenery – I detect a post in there somewhere… Regardless of how you see it, I think it’d be a shame to skip the game for this reason.

The boards themselves are thick, doublesided and sturdy as anything, the same goes for the tokens. 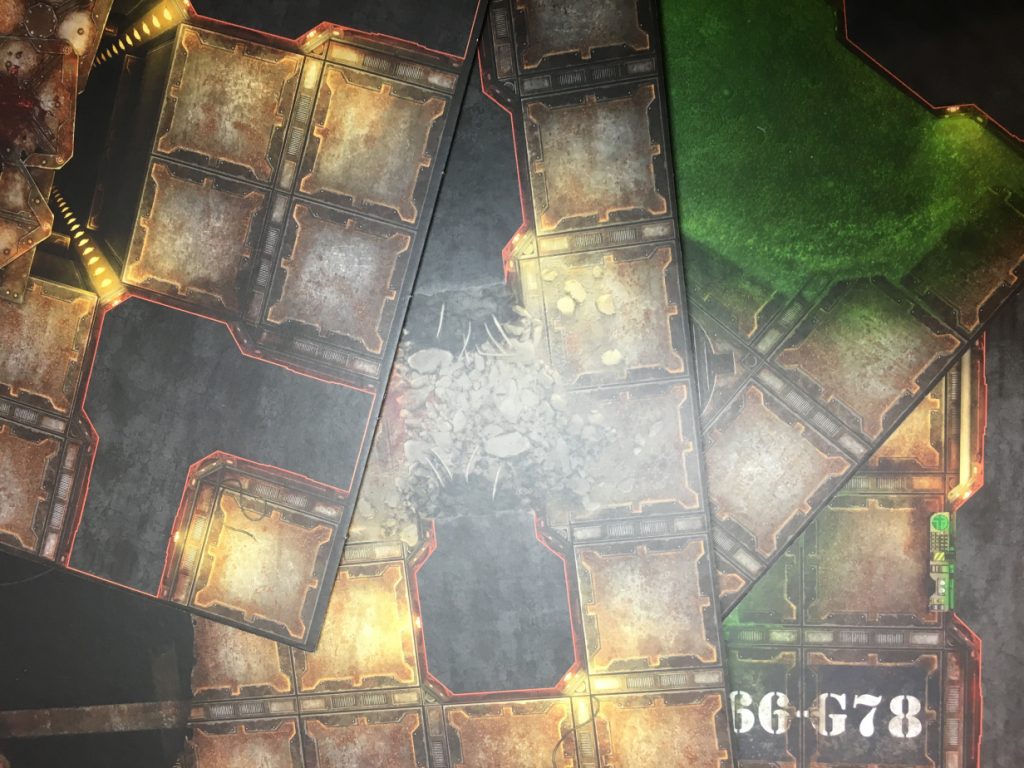 The cards are really nice, the dice look ace, and the rules are really nicely presented. I also picked up the Gang War expansion for some campaign based scrapping, so just to clarify, you don’t get this in the box.

As an introduction to gang warfare in the underhive, GW have done a cracking job. All that remains to do is paint up the minis and get playing!

A link to a short unboxing video is below.

Thanks for reading, and if you have any thoughts please comment below. While you’re here, why not follow us on our other social media so you don’t miss out on any future content:

One thought on “Necromunda has arrived and it’s wonderful! Unboxing and discussion.”

Support the Brush and Boltgun

If you are able to buy us a coffee at Ko-fi we'd very much appreciate it. Any coffees bought through Ko-fi keep us in paint and miniatures to keep the tutorials going. Many thanks.

This morning me and @newtjedi did the Liverpool 5km Santa Dash! A fun and jolly run, and surreal with so many Santas (didn’t spot the real one) but the first one I’ve done in over a decade. Aces! Newt is the awesome guy responsible for the ace intro music on Brush and Boltgun’s vids through @nighthauntersynth and you can find more of his music here:
This week’s start to finish tutorial is how to paint Madril, Captain of ilithien. Absolutely cracking miniature from the Battle for Osgiliath box. #mesbg #paintingbattleforosgiliath #paintingmesbg #paintingtutorial #battleforosgiliath #madrilcaptainofilithien #madril
After much debating, we’ve come to the conclusion that the Army of the Dead from Lord of the Rings would be the best army in RL out of all the ones GW make models of. Even the mighty Grey Knights would fall to them - they’re Ethereal so your armour is no use. And there’s loads of them, so try and Psyk them all to death you’re going to Perils at some point.
Last night’s start to finish tutorial was how to paint Gothmog, lieutenant of Sauron. The new plastic mini from the MESBG Battle for Osgiliath starter box. #gothmog #gothmoglieutenantofsauron #battleforosgiliath #mesbg #middleearth #middleearthstrategybattlegame #citadel #vallejo
Undercoating by alley lamp. Pretty sure I’ve covered them adequately…? 👀 #mesbg #battleforosgiliath #minastirith #gondor #rangersofmiddleearth #faramir #morranonorcs #morranon #gothmog
Ogor Mawtribes Tyrany painted up for last night’s start to finish tutorial over on our Youtube channel. Never painted an Ogor before, but it was a lot of fun to paint. Loads of big surfaces to play about with. #ogor #ogors #mawtribes #ogormawtribes #mawtribestyrant #warhammer #warhammerageofsigmar #ageofsigmar #citadel #vallejo #warhammerpainting #warhammercommunity